All the Winners of the 2014 Cobfoolery Contest and their winnings


I’d like to begin this post by saying “thank you” once again to everyone who entered their modified corn cob pipes in the 2014 Aristocob Cobfoolery Contest.  I especially appreciate that you entrusted us with your creation when you shipped your pipe to us for display at the Southern Fried Pipe Show.  The display was a hit with the folks who stopped by, and if you had put a price tag on your pipe I have no doubt that many of them would have sold.

As a reminder, let’s run-down the prizes that where up for grabs:


So, without further ado (Yes, that's how it's spelled), here are all the individual awards.

Runner-up: Doug Erwin
Doug wins a a total of $40 in Aristocob.com credits.  You can find Doug on the Pipe Smoker’s Forum at http://pipesmokersforum.com/community/members/dgerwin11.2046/ and find Doug’s pipes on Etsy at: https://www.etsy.com/people/cobcobbler

Thirst Place: Angela Meek
For entering what has to be one of the most expensive corn cob pipes ever made, Angela wins a total of $30 credit from Aristocob.com.  Find Angel’s pipes on Etsy: https://www.etsy.com/shop/AngelasTampersetc  Angela can be found on Youtube at: https://www.youtube.com/user/angelasbrandnewbag

First Place: Tim Roschy
Tim wins a total of $50 credit from Aristocob.com.  Add to that a Missouri Meerschaum Freehand pipe on a custom laser engraved wood plaque.  Find Tim on Youtube at: https://www.youtube.com/user/TravSpirit7

Runner-up: Jacob Hill
For this entry Jacob wins a $20 credit for being a runner-up. But wait, there’s more below… Find Jacob on Youtube at: https://www.youtube.com/channel/UCocyVbIF2avmuNjP_Zg9DXA/feed

Thirst Place: Chris Chopin
For his entry Chris wins a total of $30 credit from Aristocob.com.

Thirst Place: David Galehouse
David wins a $20 Aristocob.com credit for being selected as a finalist and a $10 credit for taking third place, PLUS $20 for a non-placing entry, for a total of $50 credit from Aristocob.com.  Find David on Youtube at: https://www.youtube.com/user/DWStormcastle13

So, if there’s any lesson to be learned from this year’s contest I believe it’s:

We have a clear winner in Aristocob's 2014 Cobfoolery contest, but... 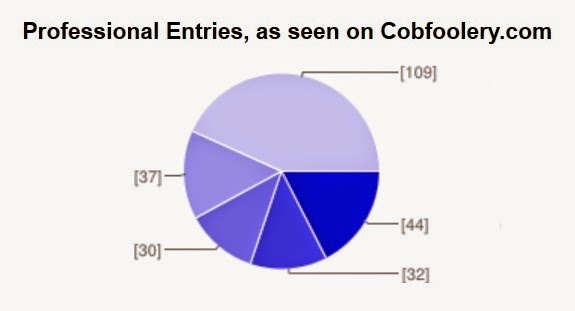 Wanna see the results of the voting in the Professional category of Aristocob's 2014 Cobfoolery contest?  OK, here's a chart showing the results:

Now, if you want to see who the winner is you're gonna have to watch the Youtube video announcement from the Southern Fried Pipe Show on http://www.Youtube.com/Aristocob.
No comments:

The following, presented almost in alphabetical order, are the finalists in the "Amateur Classic" category of the 2014 Cobfoolery Contest.  More details to come.  (Click Pics to Biggie-Size) 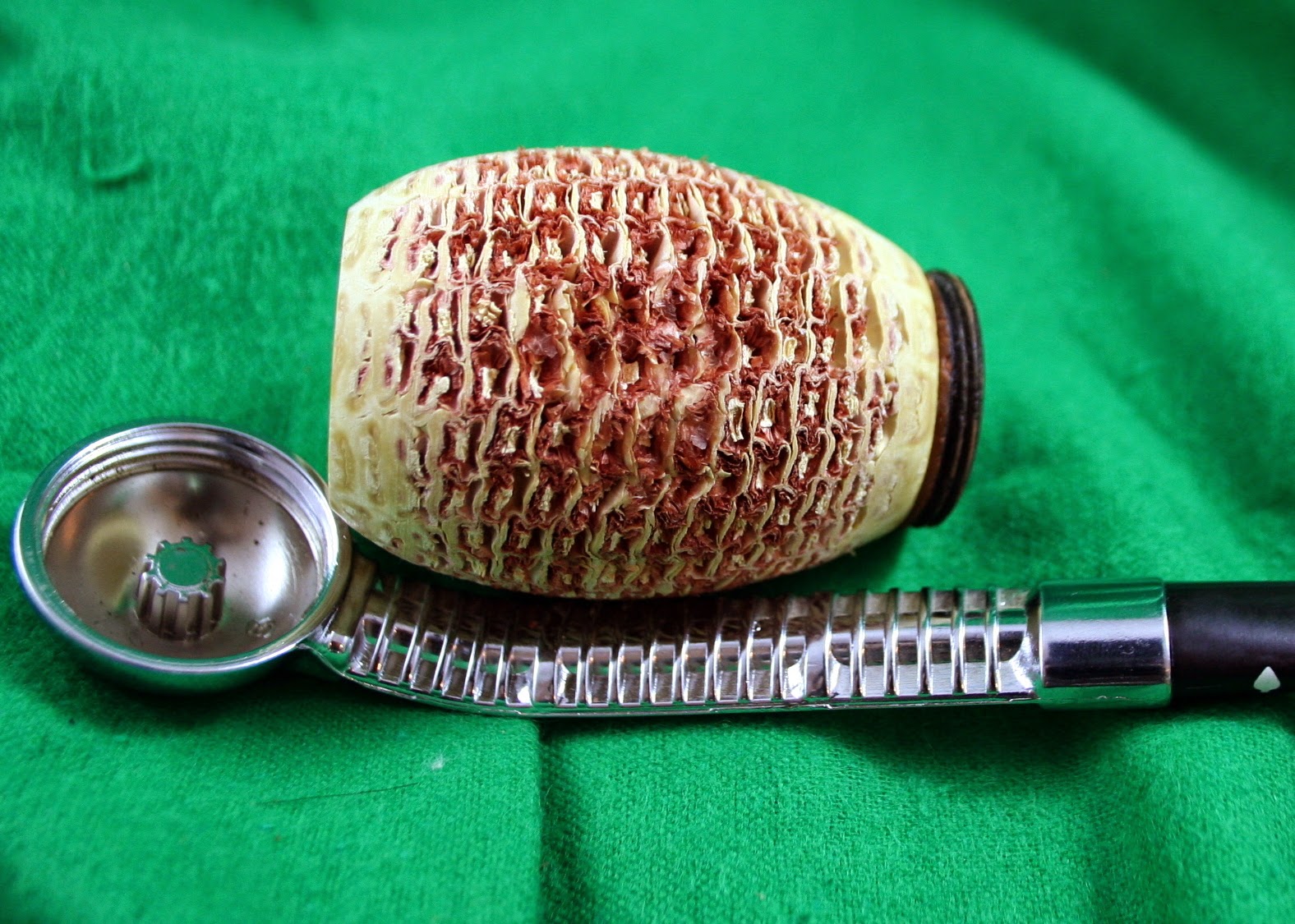 Chris said about his pipe:
This is my Cobking.  It was simple to make, and didn’t require the skill I’m positive many other entries will this year.  I myself had plans for something a bit fancier, but ended up making this pipe for the simple reason that I wanted one.  I’ve got Viking bowls a plenty, and I’ve seen meerschaum ones out there.  But I love a cob, and I love a Viking, and it’s as simple as that. 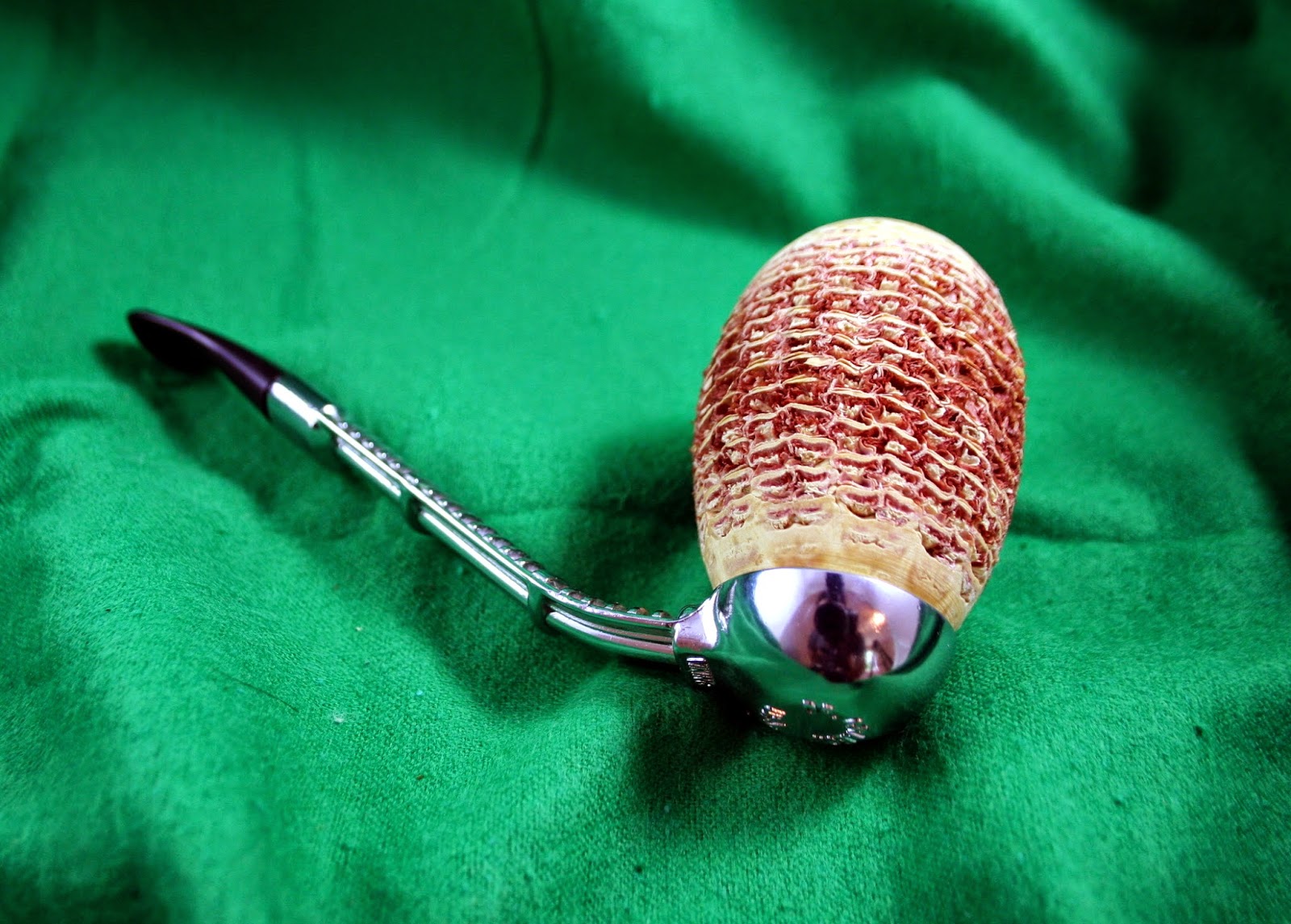 To make this pipe, I sacrificed one of the many new old stock Viking bowls available from Swisher’s surplus on eBay for its threads, and topped it flat just above the cut off threads.  I used Titebond III to attach that threaded piece onto the base of this Country Gentleman and clamped it.  I then drilled the airway through the bottom of the bowl in successive sizes until I reached 5/16”.  To my mind this will be a fantastic cob because it won’t need mudding, can be cleaned easier than any other, can be switched to a straight pipe at will, or even some other brands (Kool Smoke?  Dry Smoke?  Something like that)  And with my travel/camping pipe, my Viking, I don’t have to go without a cob or carry a whole ‘nother pipe to have one.

Thanks again!  This was lots of fun to do. 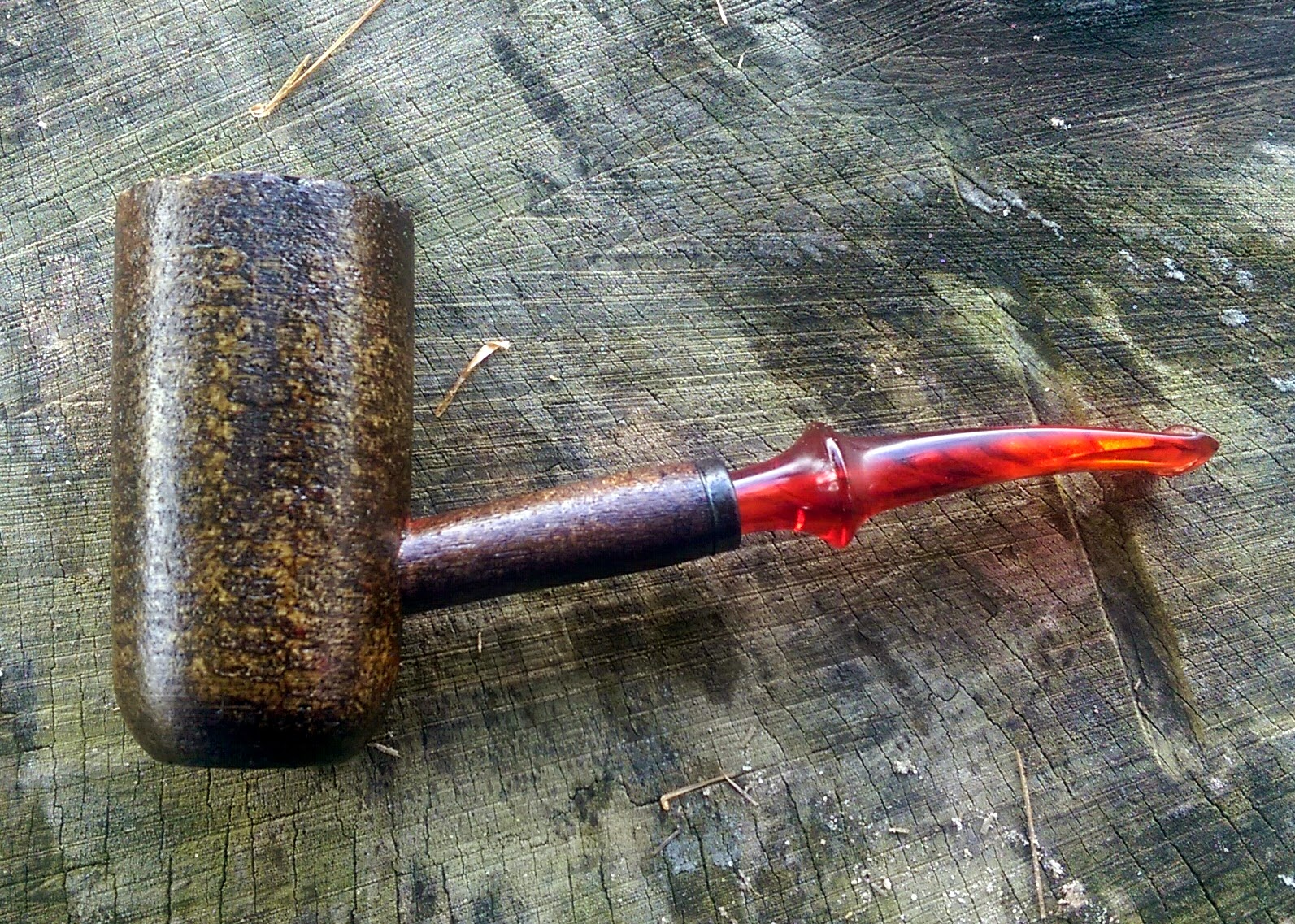 Daniel said about his pipe: 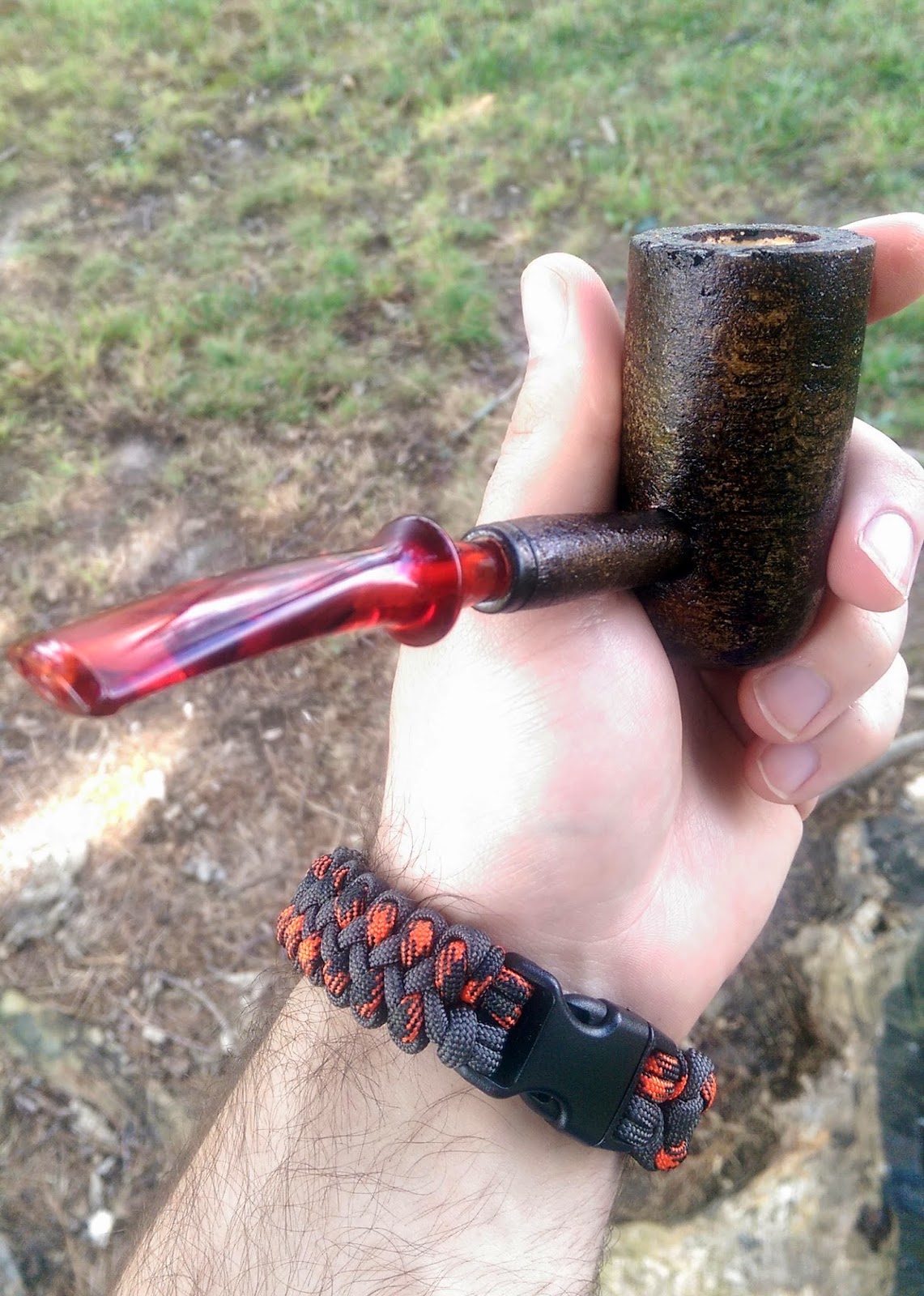 I started out with a basic bent General and purchased a 3" straight red swirl Lucite spear stem for it as I felt a shorter and more simple stem in a such a color scheme would be best for the overall feel and balance.  I then carefully heated and bent the stem so that the angle of the stem itself is the same angle as the top of the bowl. After finishing work on the stem, I then proceeded to stain the bowl itself.  I used three different types of dye on this cob and allowed each coat a different amount of drying time - ranging from a few minutes to over 24 hours - to allow for a rich and detailed texture with notes of tan, mahogany, black, and red.  This, in turn, worked perfectly with the red swirls in the stem. 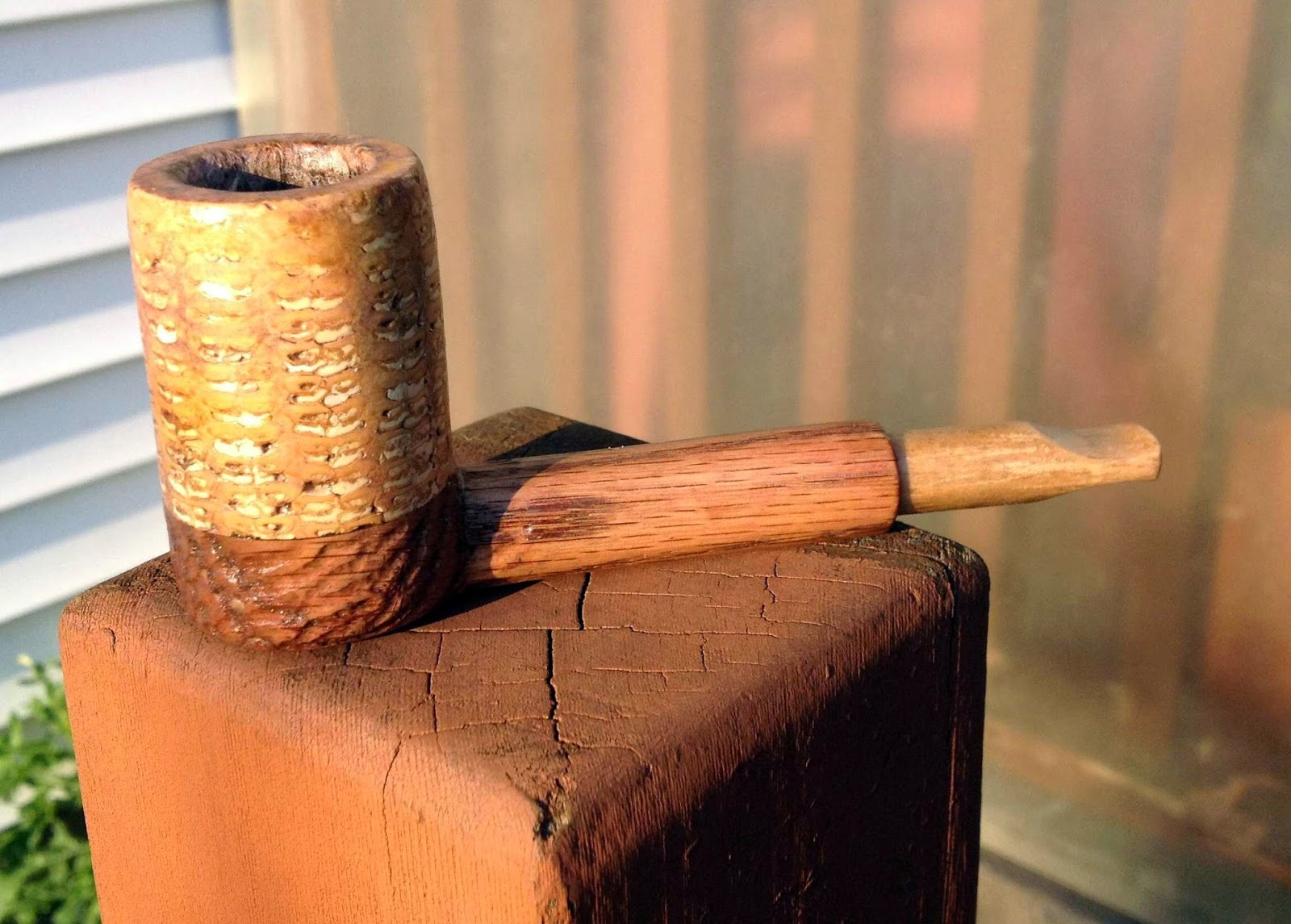 David said about his pipe:
This "Kornwoodie" was made from a MM MacArthur, solid oak, and the tip from a Swisher Sweets cigarillo.
I love those little cigars. Especially the soft wood tips. So the idea behind the reversed tenon is that when I chew up the bit too much, I can smoke another Swisher and put it right onto the pipe! 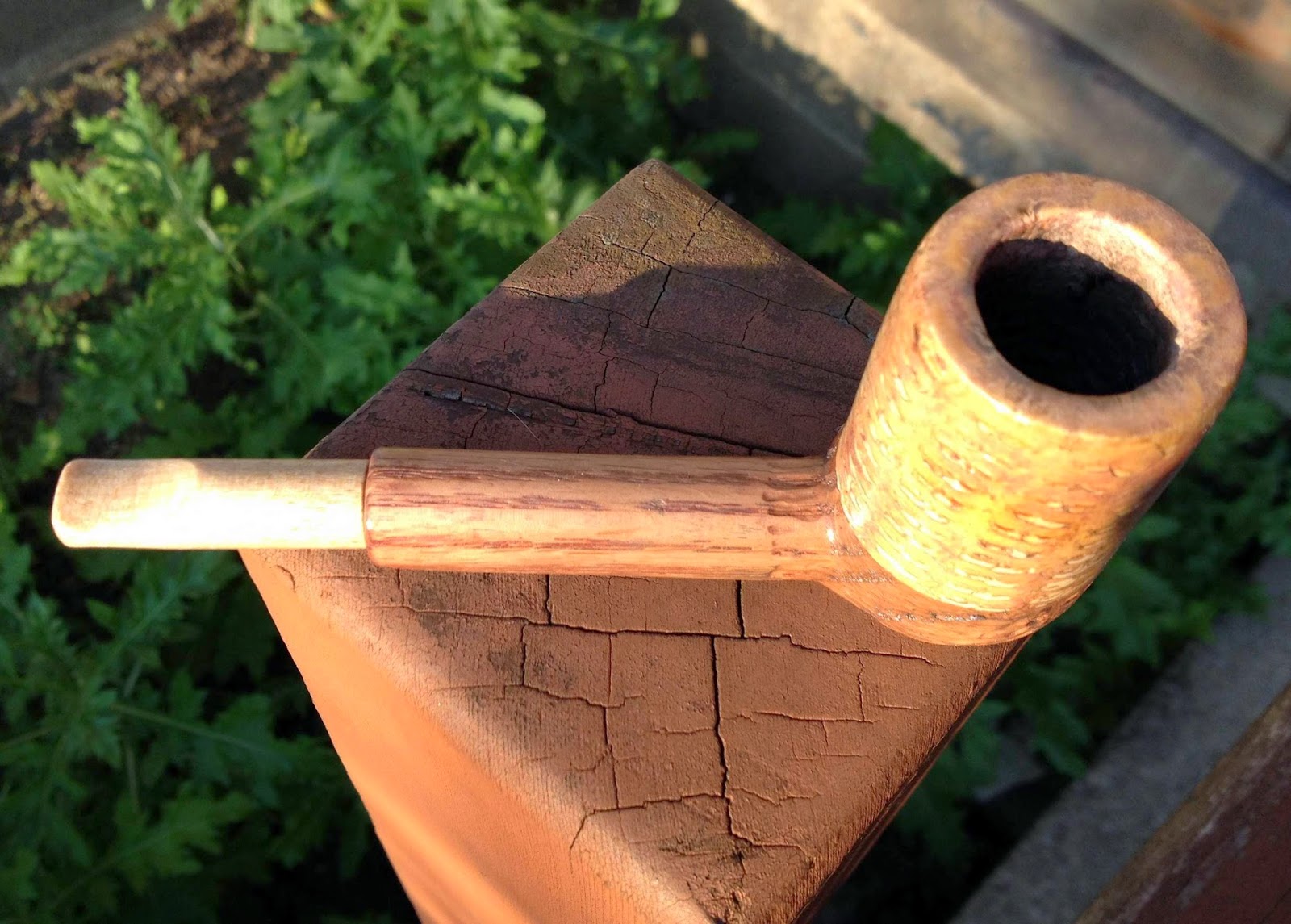 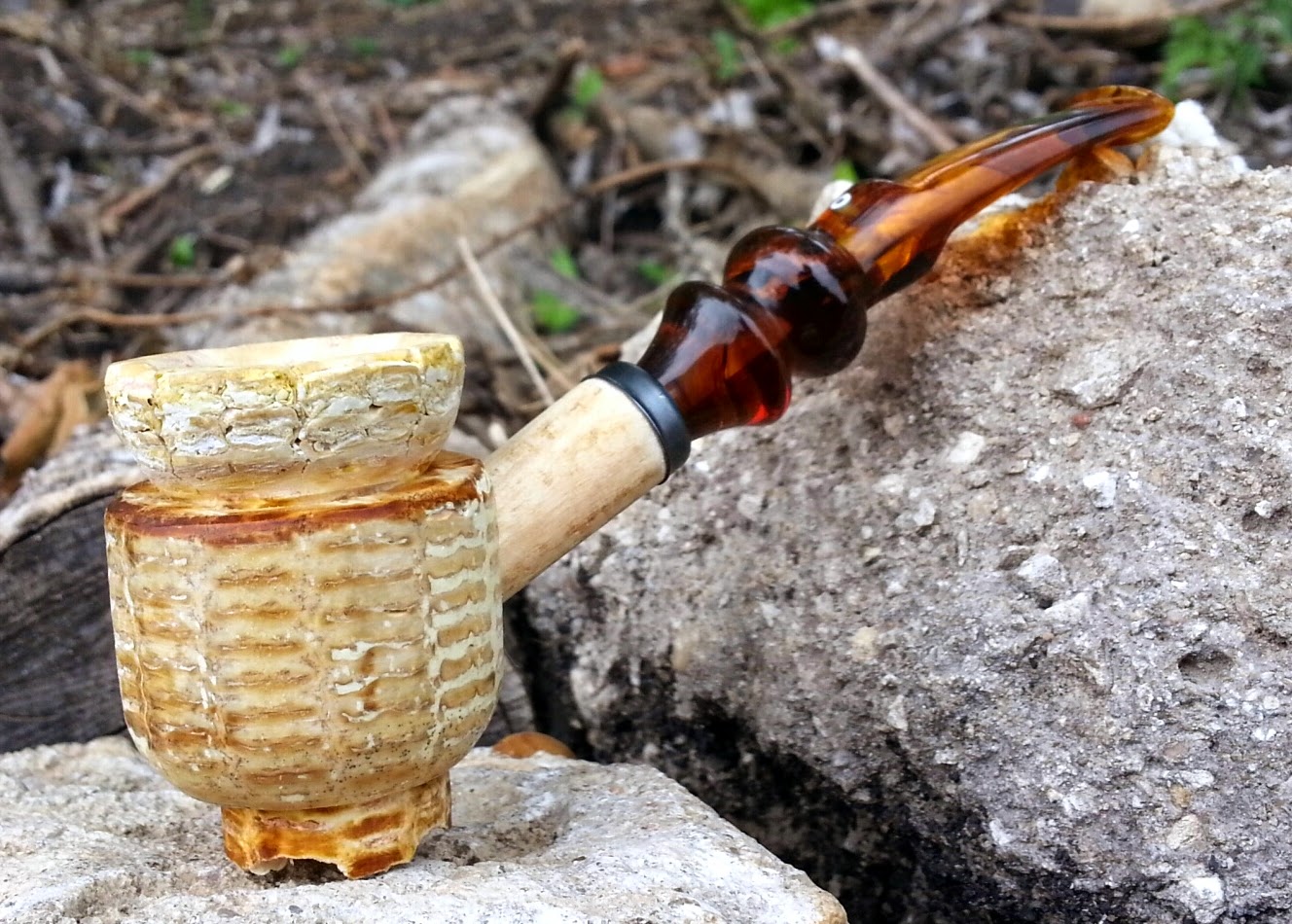 Dodif said about his pipe:
It's called "The PopCorn Cob" and resembles the classic shape of a bent billiard.
I used a Missouri Meerchaum Washington pipe for the bowl. I cut a lot of the top off and filed it down. Then used a Missouri Meerchaum Legend to shape the top piece and the bottom plug. Tons of filing to make the top and bottom piece. Also shortened the shank, and used a forever stem that I bent myself. If you need anymore pics just let me know. Thanks for looking. -Dodif 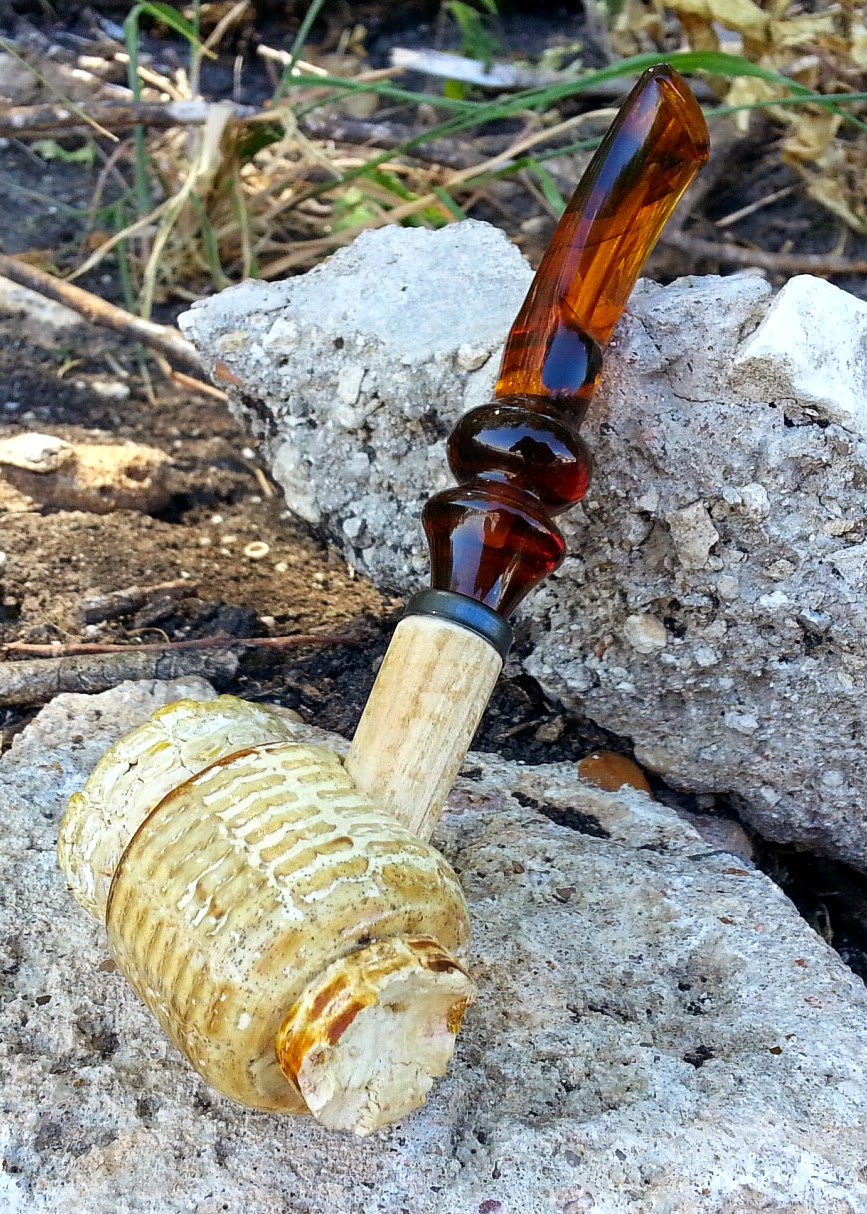 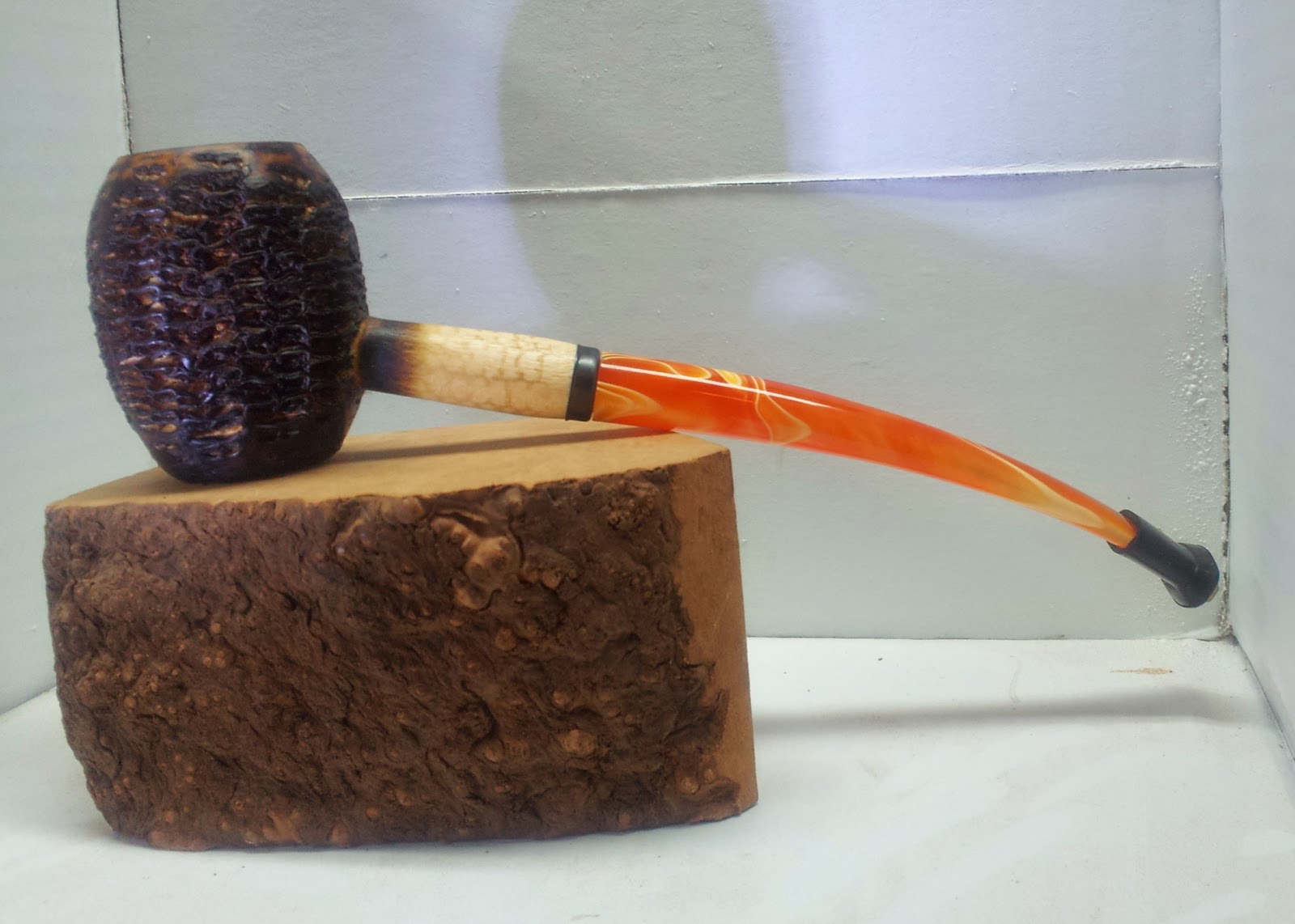 Tim, being a man of few words, said this about his pipe:
Here is the "Burnt Devil Cob." I also posted a vid titled Cobfoolery entry. Thanks for another great contest. 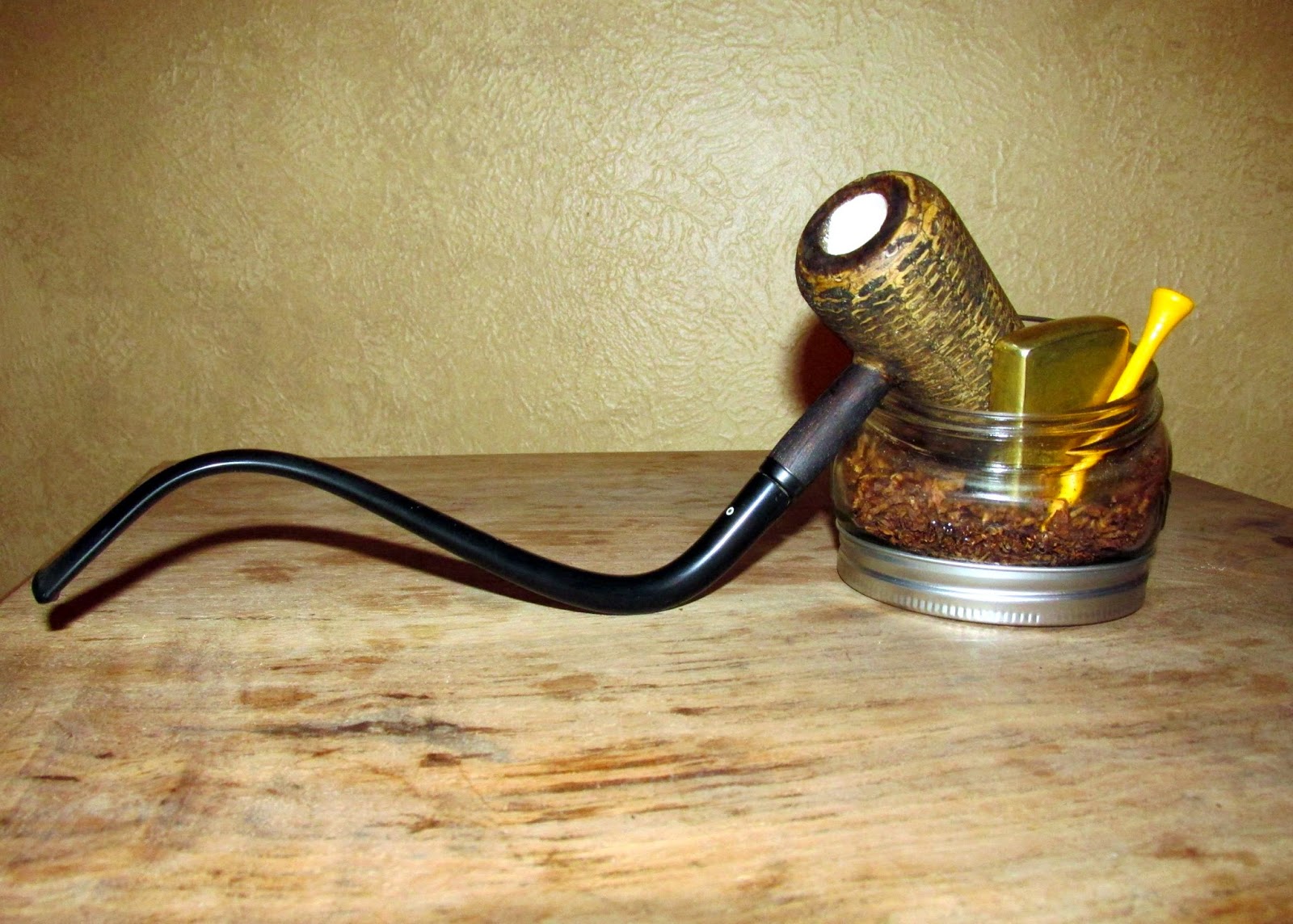 Jacob said about his pie:
The Emperor’s Ear was built using The MacArthur Cobfoolery Kit and is based on the MacArthur 5-Star pipe although I do not prefer the 5-Star due to the fact that it comes with an unfiltered stem. This pipe features a fire-darkened wooden shank and a Walker Briar Works Forever stem. The bowl was plastered, sanded, and finished in Dark Walnut stain. 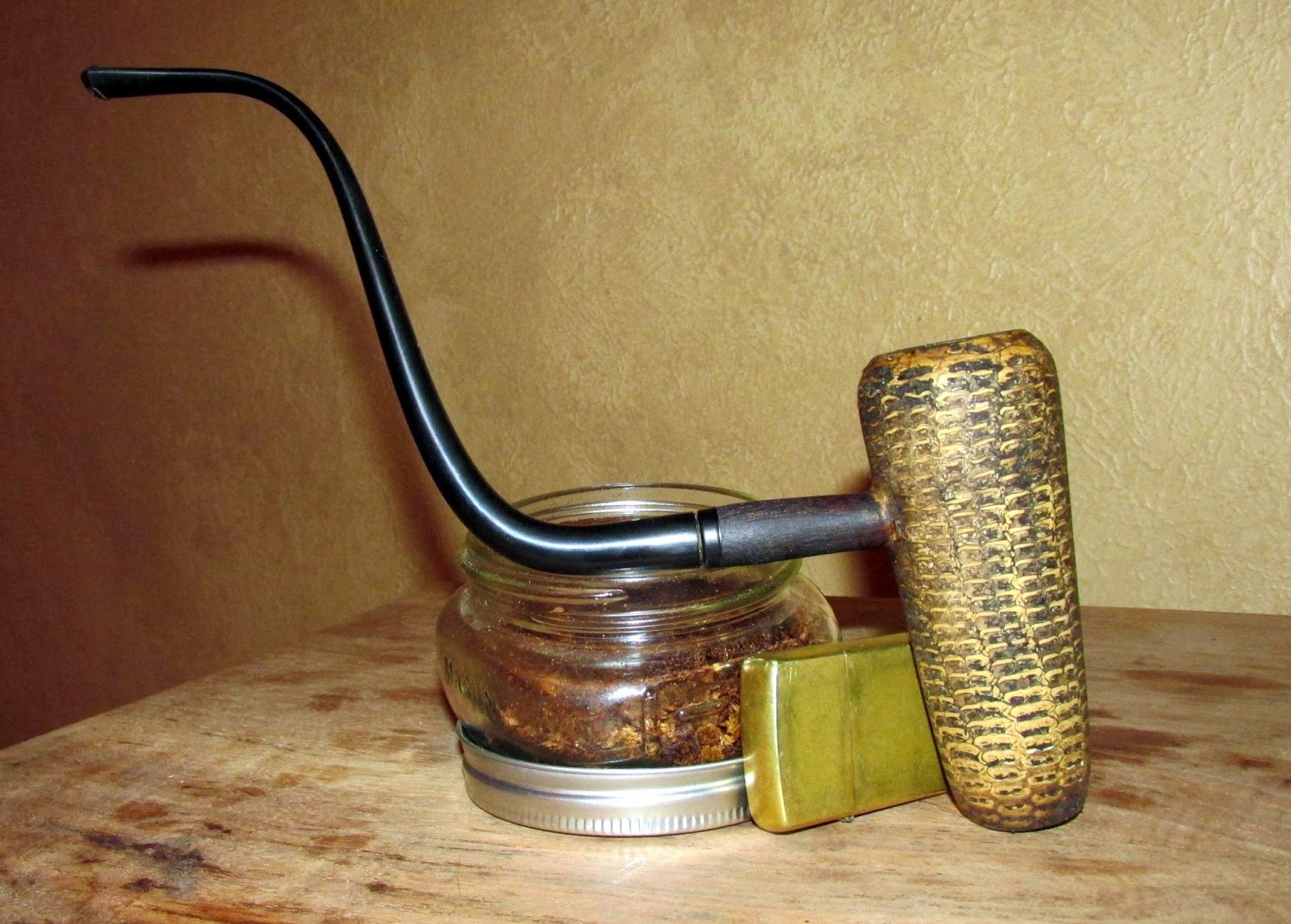 Jacob talks about both of his entries in the video below.  FF to 2:00 to see this entry.
No comments:

The following, presented almost in alphabetical order, are the finalists in the "Amateur Freehand/Fantasy" category of the 2014 Cobfoolery Contest.  More details to come. (Click pics to Biggie-Size) 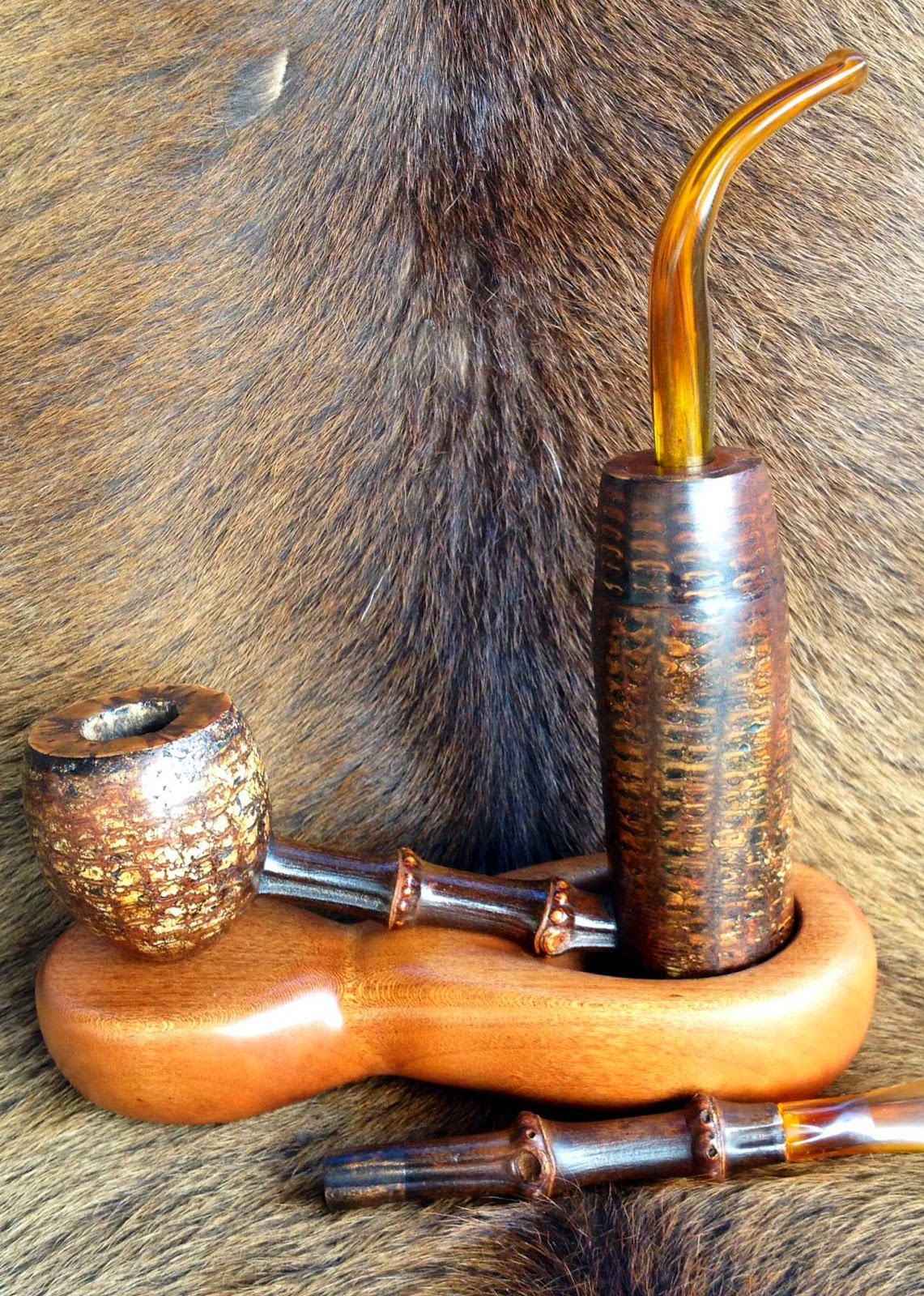 David said about his pipe:
This pipe has been whittled together using parts from three Missouri Meerschaum pipes that I got from a Goodwill auction, of all places!
It also has black bamboo for the connector and the matching tamper.  The tamper is also made using a small MM amber bit and a stainless steel rod for an internal pipe tool. I made the stand for this pipe from a block of cherry. 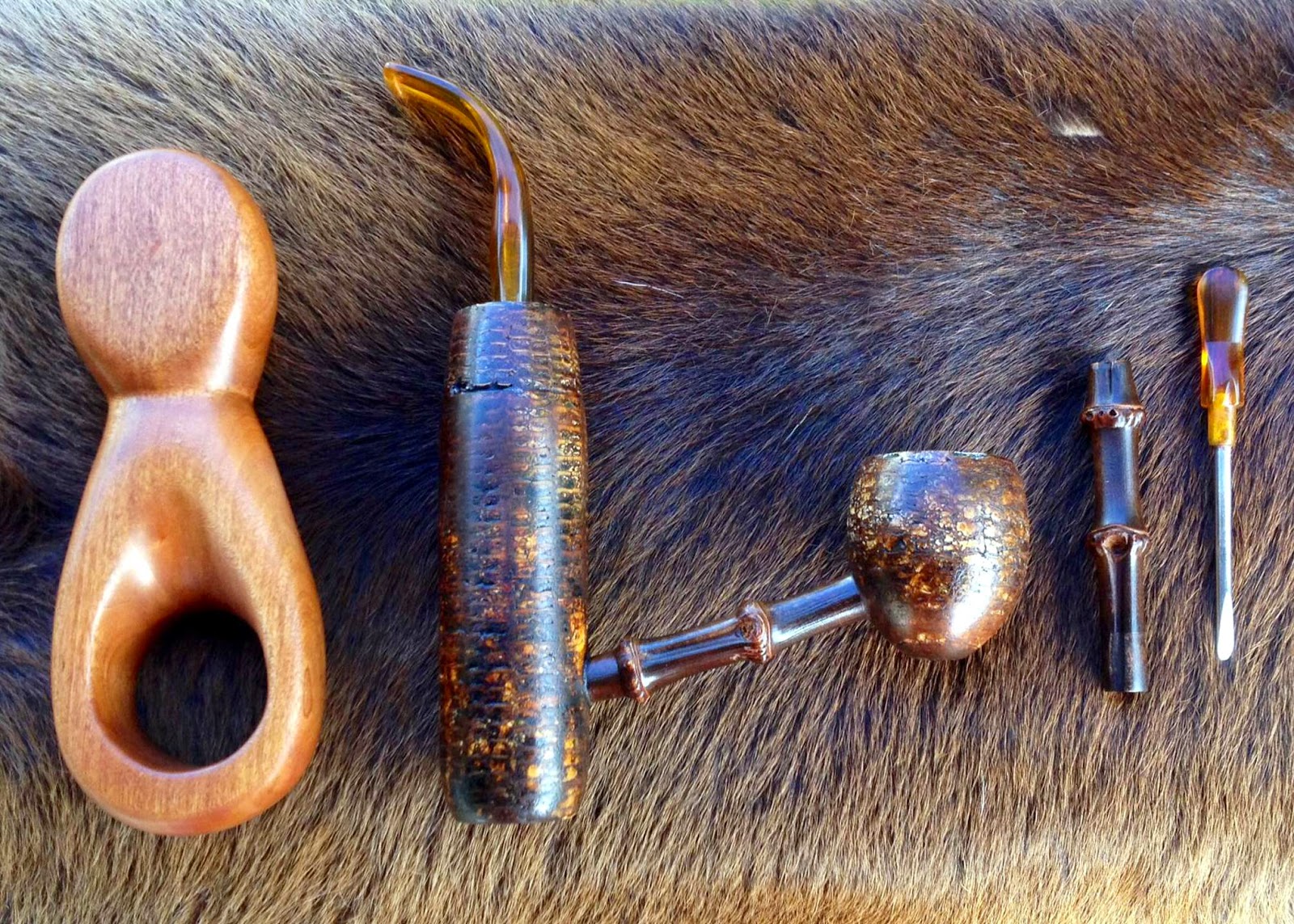 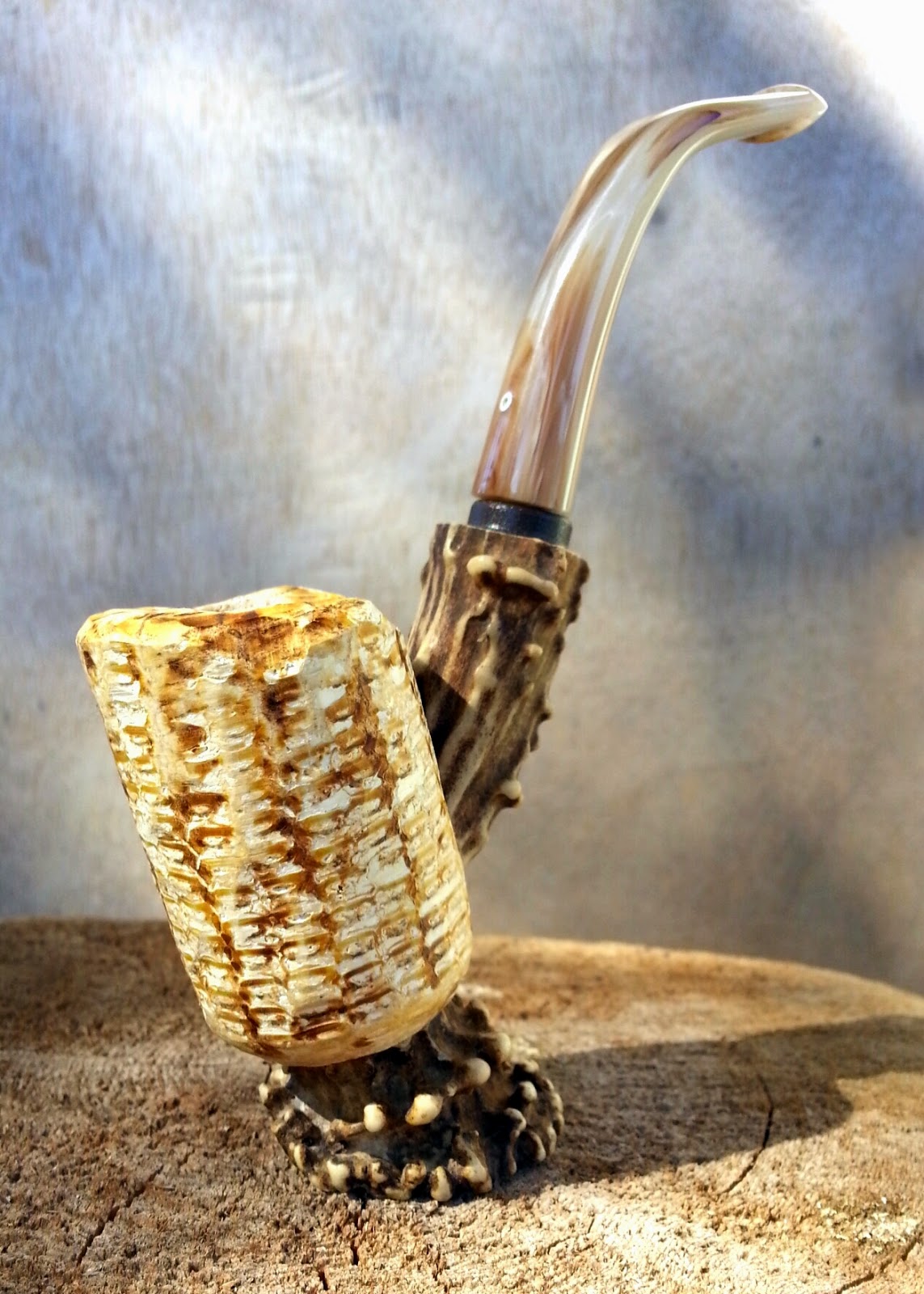 Dodif said about his pipe:

Hello! This is my entry for the 2014 Cobfoolery Freehand/Fantasy category. It's called "The Deer Hunter".
It started out as a Missouri Meerchaum 5th Ave. I tried to go for that look as if I "snapped" the corn cob in half and left it as is. I also burned the rest of the cob all over using my grinder. I used deer antler to plug the bottom and for the shank. The stem is a forever stem that I bent myself. I was worried about the deer antler meeting with fire, so I used cherrywood from a Missouri Meerchaum Ozark Hardwood pipe to put on top of the deer antler plug part. Also on the deer antler shank part I drilled out enough to be able to insert a small piece of the original shank inside. The pics will show what I'm talking about if none of this makes sense. Lol Thanks for looking at my pipe. Let me know if you need more pics of anything. -DODiF 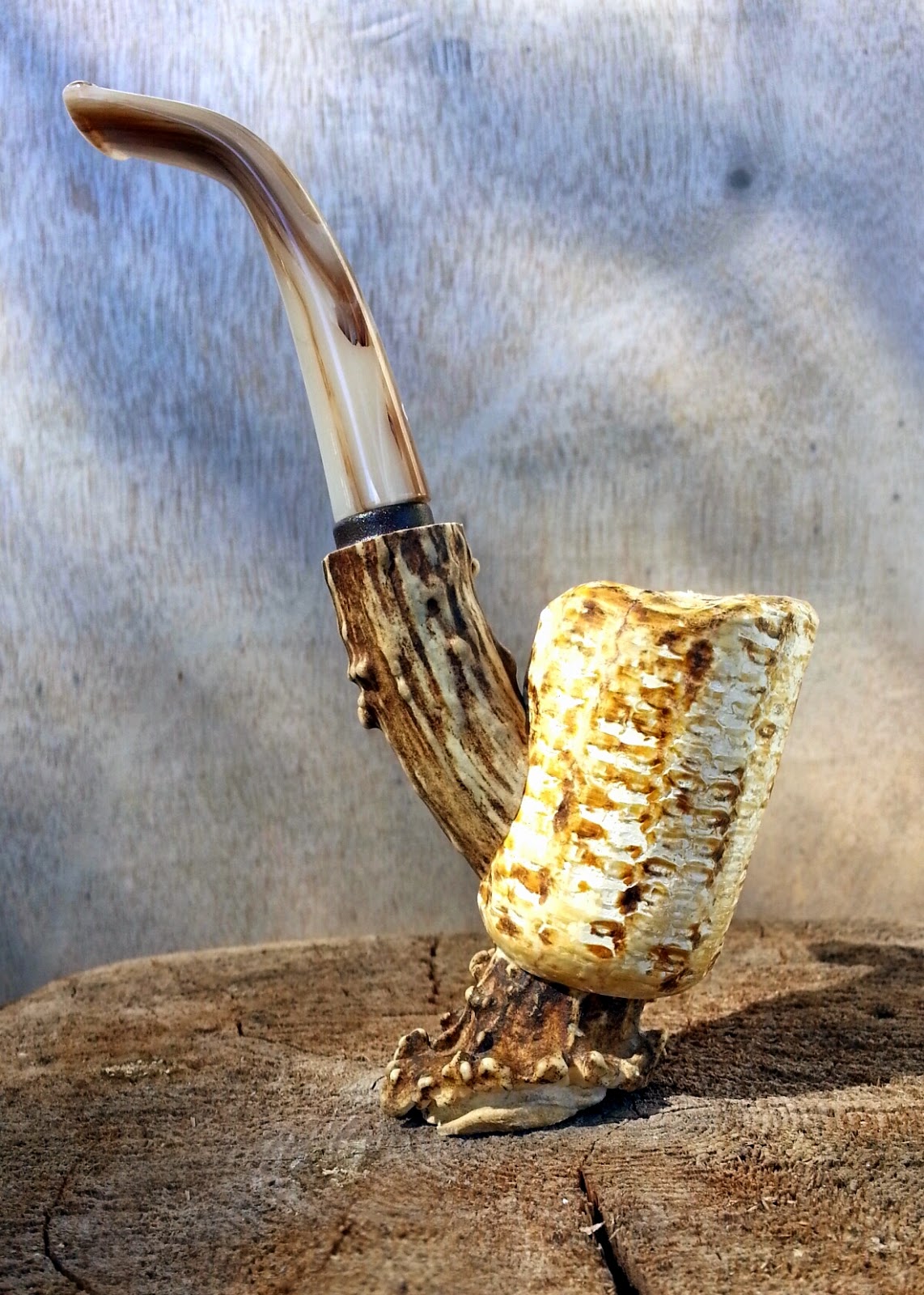 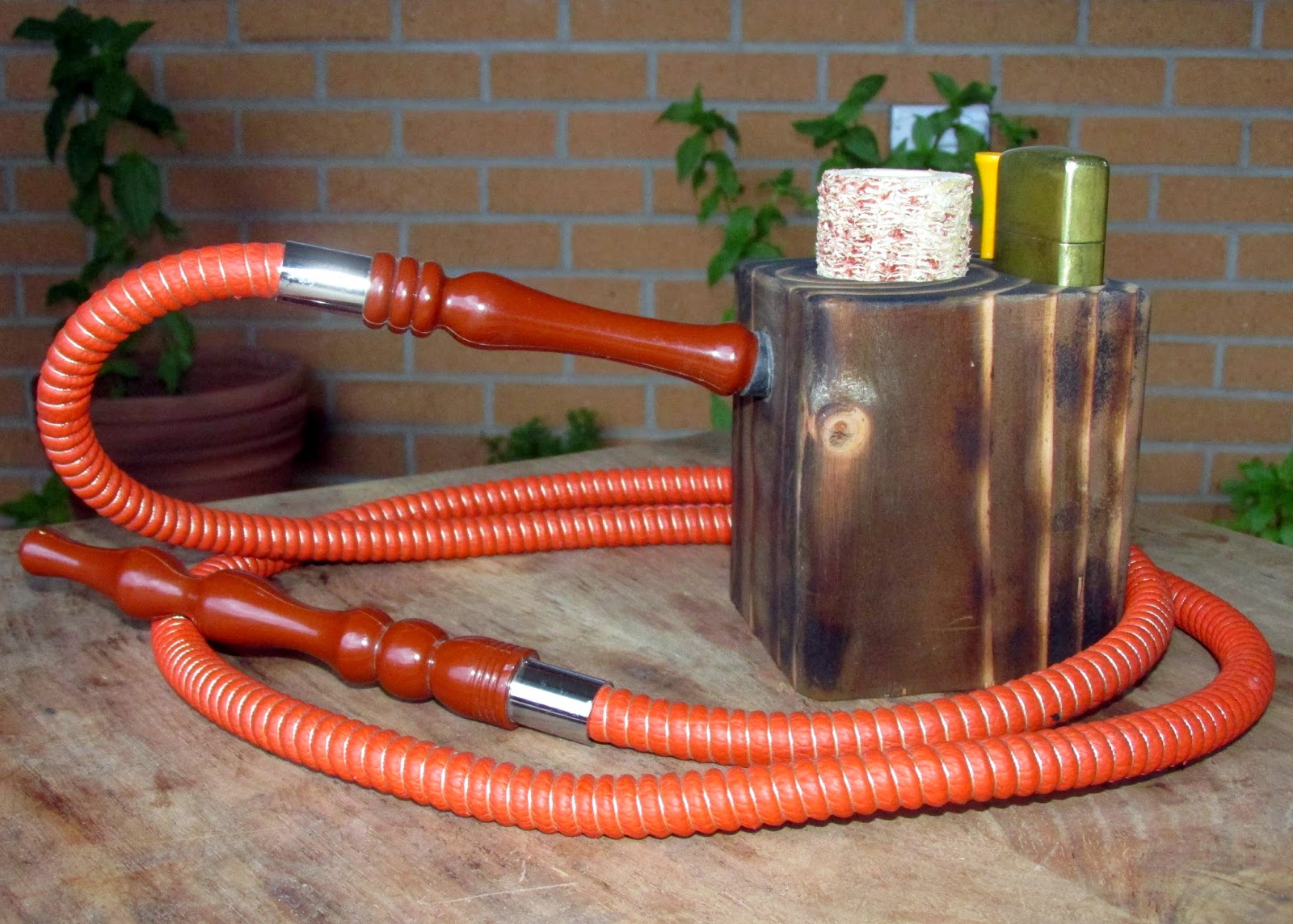 Jacob said about his pipe: 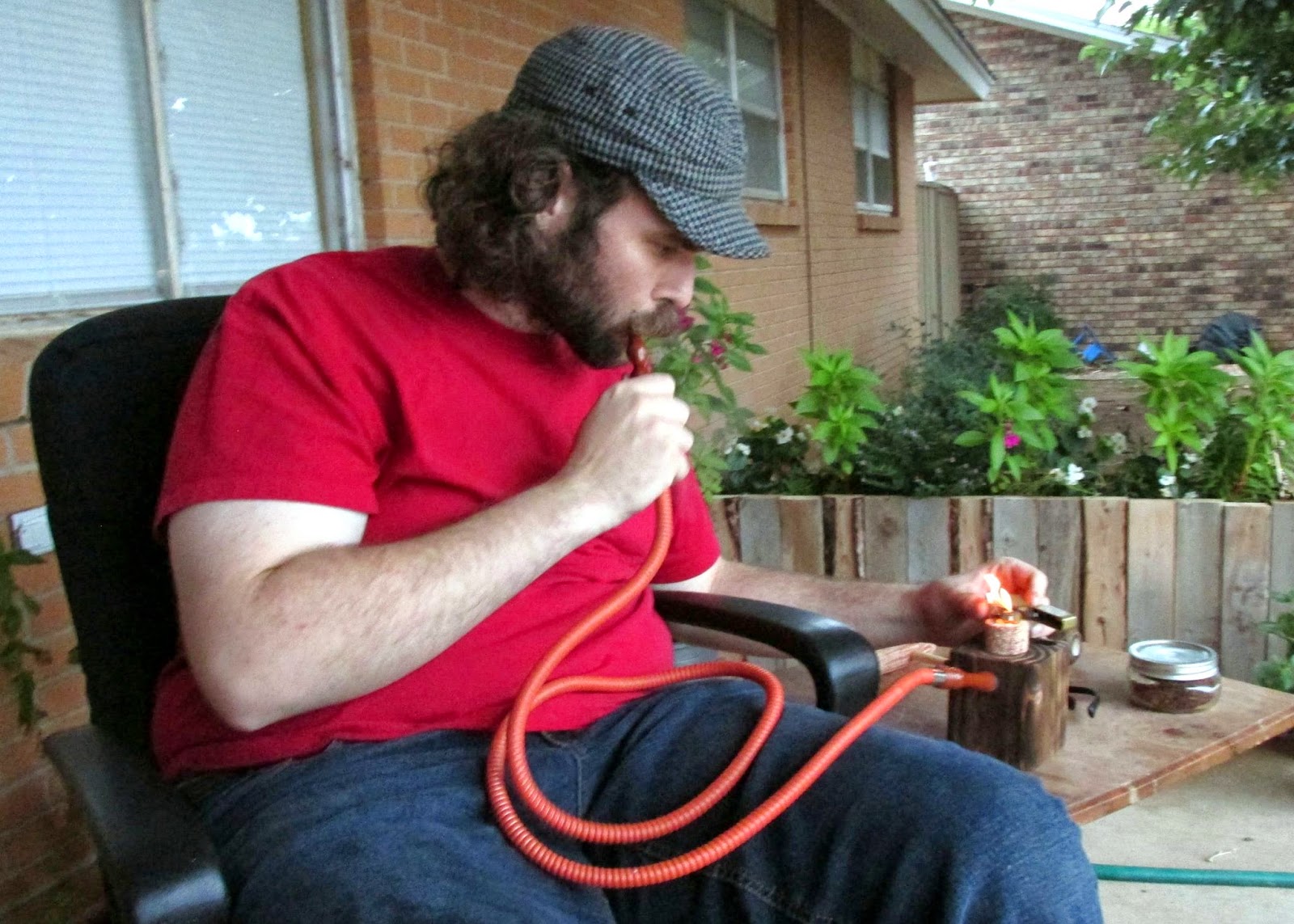 The Cob Cube was built using The General Cobfoolery Kit. The cob was placed into a 4x4 block of fir wood and is smoked through a hookah hose. This idea was inspired by a desk pipe that was popular in the 50’s and 60’s and was designed so that one could smoke at their desk or even in bed without having to worry about making a mess with ashes. Additions were made for convenience which include a slot for my favorite Zippo lighter along with a hole for a tamper.
No comments:

The following, presented almost in alphabetical order, are the finalists in the "Professional Classic" category of the 2014 Cobfoolery Contest.  More details to come. (Click pics to Biggie-Size) 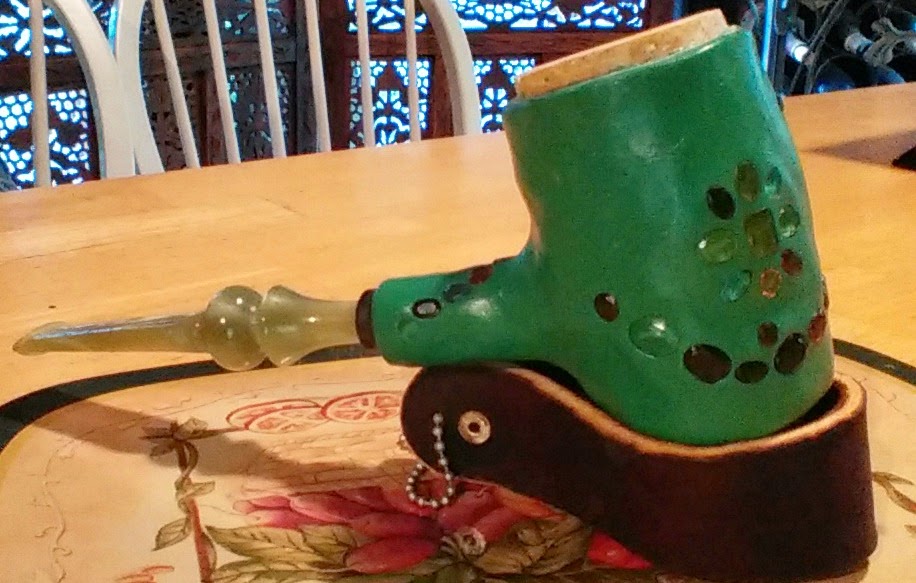 Angela said about her pipe:
What can I say? I was inspired to make the most of a gift of gem stones from my brother. I have had these for a few years and kept wondering what I was going to make with them. When time came for creating something for the Cobfoolery contest, I knew these would be my choice of material. 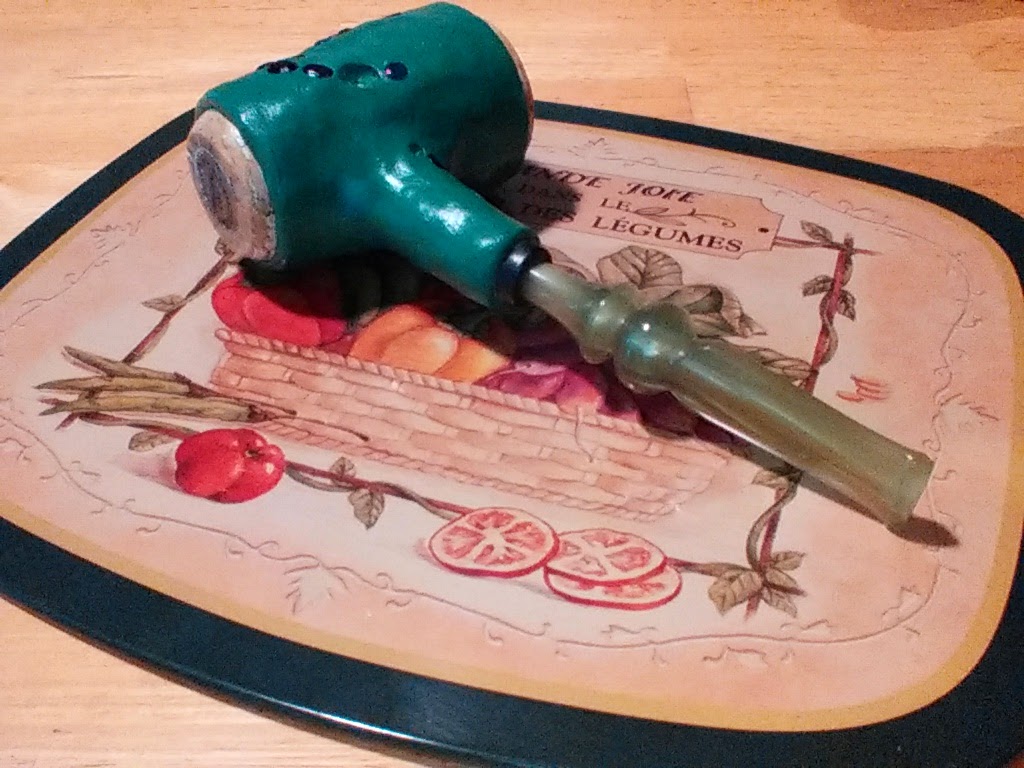 I have always loved mosaic art work. I emptied the stones onto the table and began playing around with them to see what kind of pattern I could make. I love the haphazardness of mosaics and the ruggedness of their appearance. I decided this was perfect for me since precision is not a requirement! The gem stones that I used are rubies, garnets, amethysts, sapphires, tanzanite and several others I can't pronounce much less spell. LOL! I hope you enjoy my artwork!
Thanks,
Angela 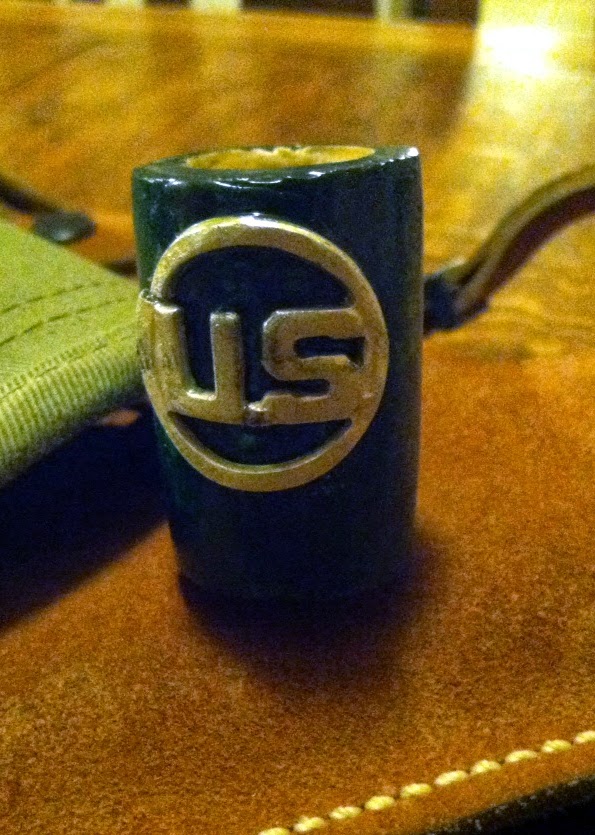 Jeff said about his pipe:
My take on what a standard issue military pipe would have looked like during WWII. 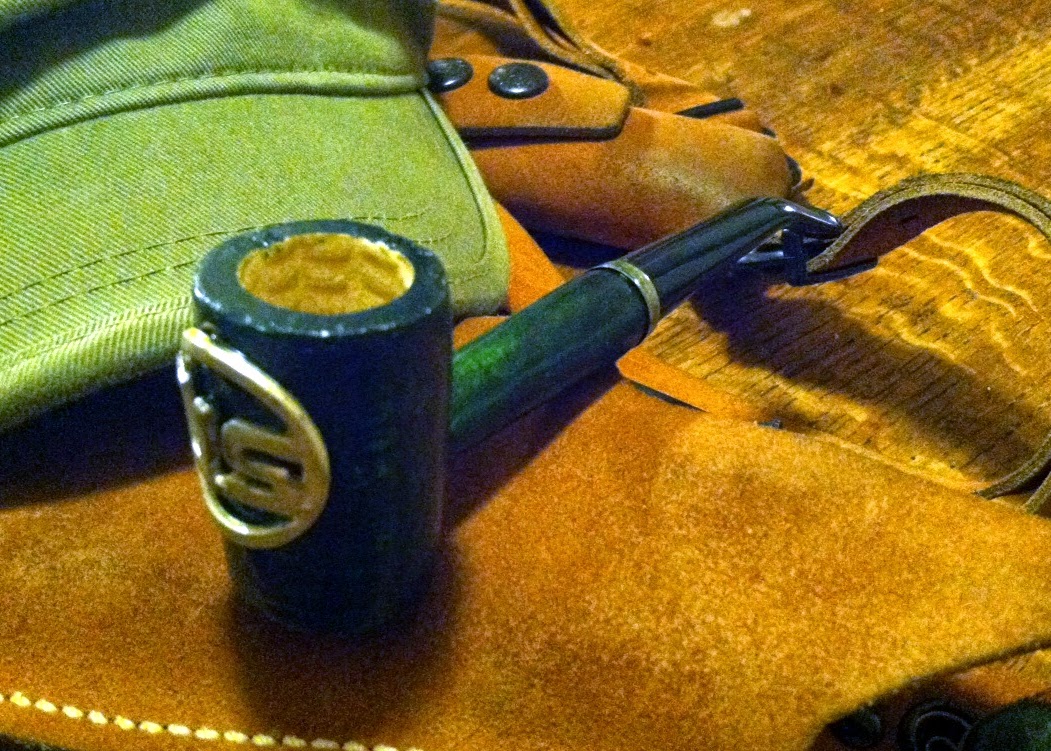 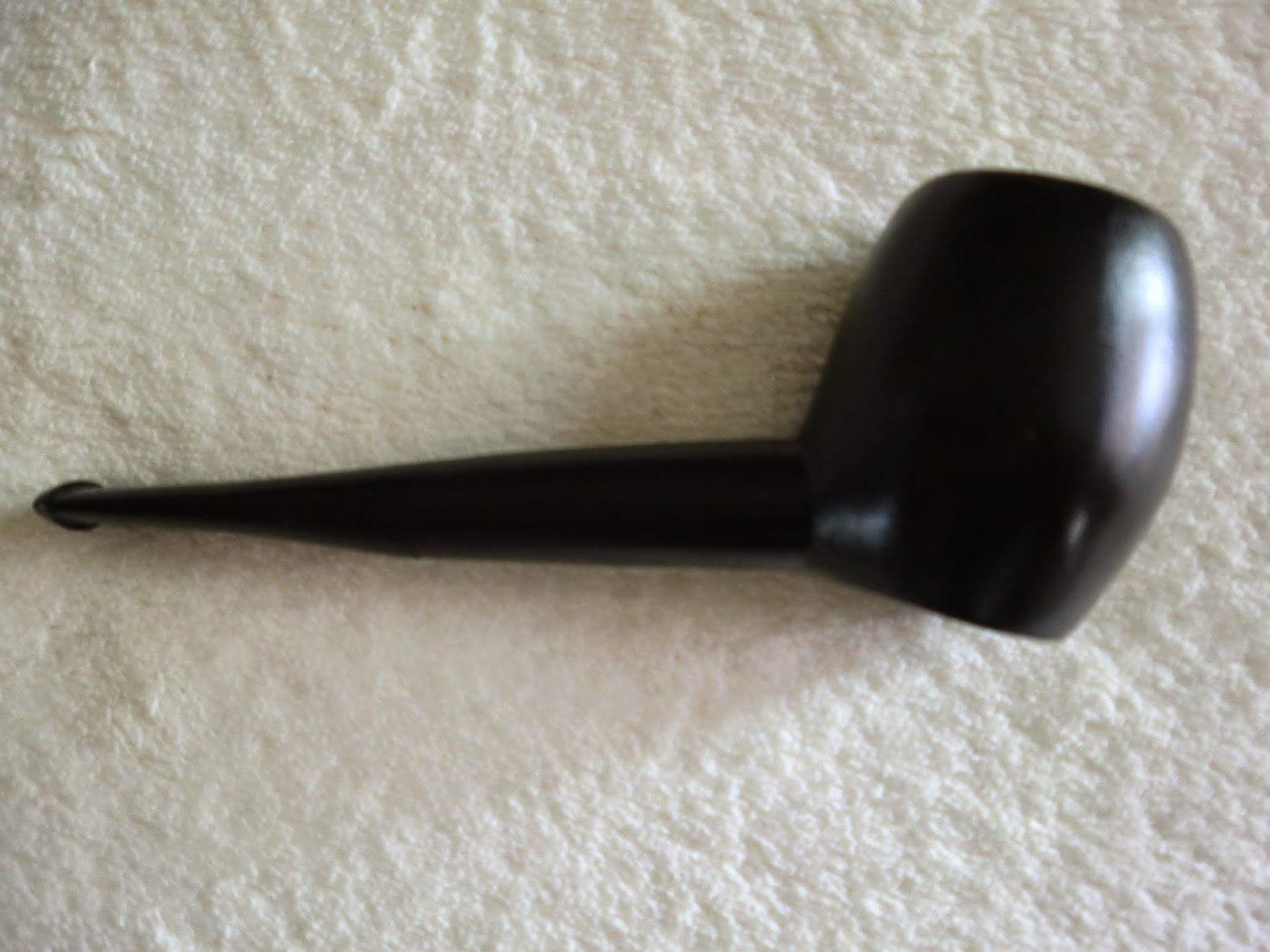 Riccardo said about his pipe:
This is a smooth pride cob, with a briar shank and vulcanite stem.
I also used a briar heel/bottom and stained it black. 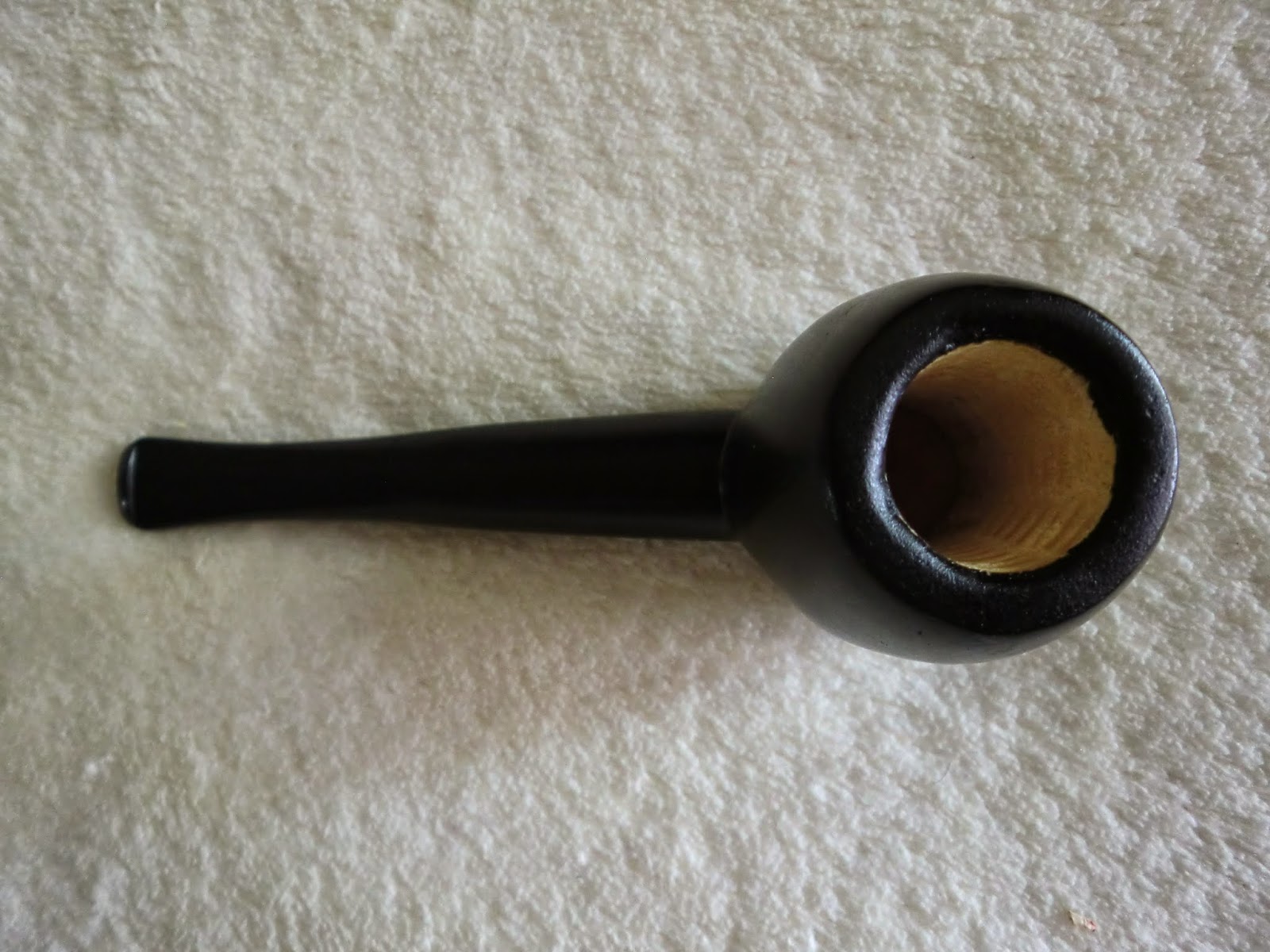 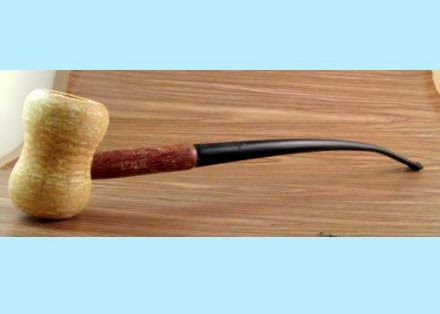 Doug said about his pipe:
This churchwarden (or cobwarden as I like to call it) is based on the Missouri Meerschaum Great Dane Spool bowl. The factory shank has been replaced by one turned from lacewood. The stem is Italian Vulcanite. 5/32'' airway.

I do not like filtered pipes. I do like to tinker.  To satisfy both of these traits, I decided to modify some cobs to give a cob smoke and a briar like draw. The airway is 5/32", therefore no filter is need to restrict the draw. 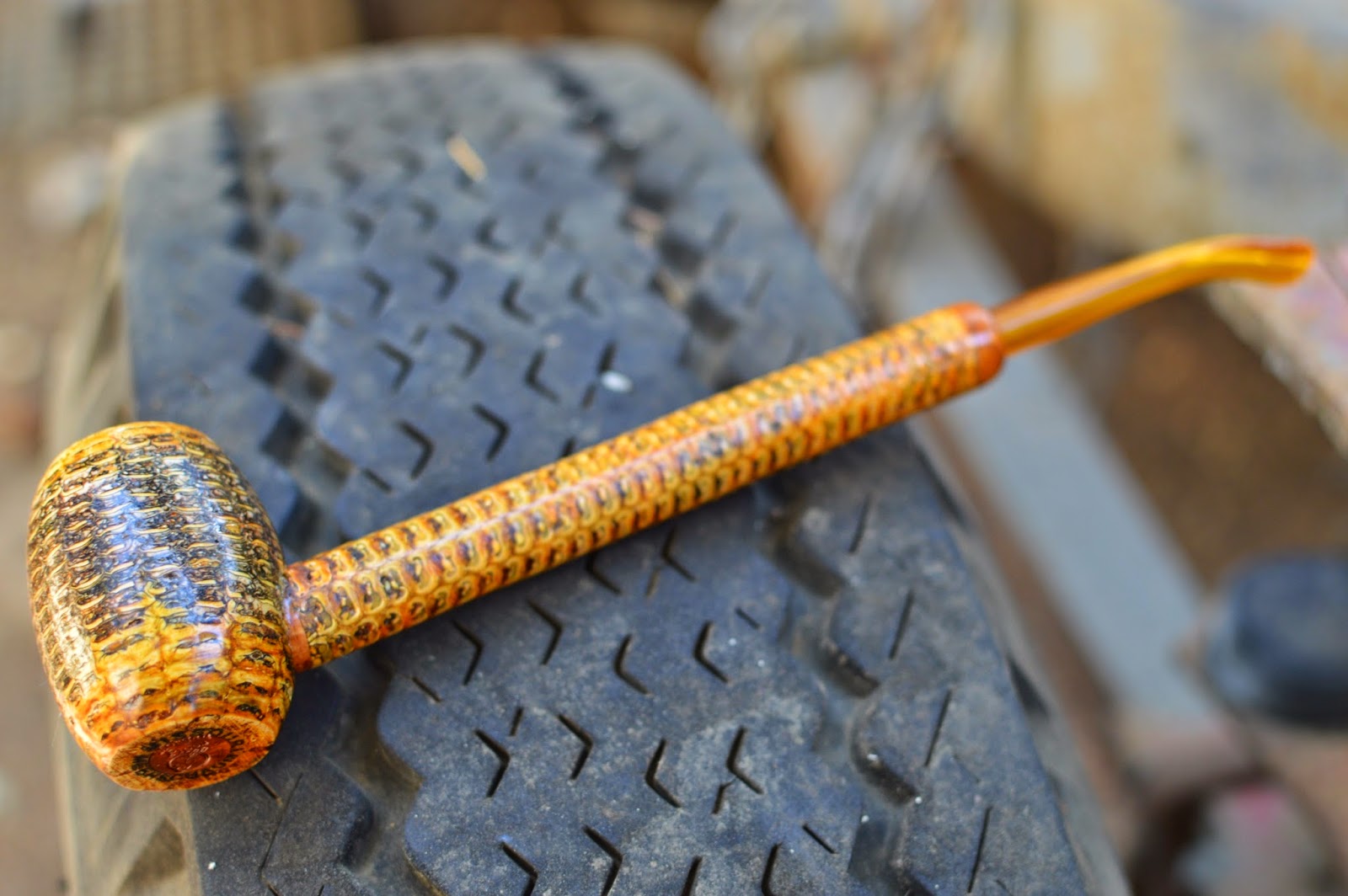 
This is the “Porchdweller”. It is the perfect friend for a fall evening outdoors. You take a few puffs and look out over your property with pride. The air smells of freshly cut grass and you hear cow bells jingling in the distance. The dog is chasing after squirrels trying desperately to collect acorns from the yard. The sun is going down and you’re sipping sweet tea on the porch. Life is good :)

It is 9.5” long by 2” tall. The shank and bowl are crafted from Missouri Meerschaum corncob. The shank has a briar liner and end caps . The pipe will accept all standard cob stems. The finish is what I would call “country aristocrat”, similar to the “country gentleman” finish but with more tan and brown. The pipe is finished with an exceptionally smooth 100% carnauba wax finish. Enjoy! 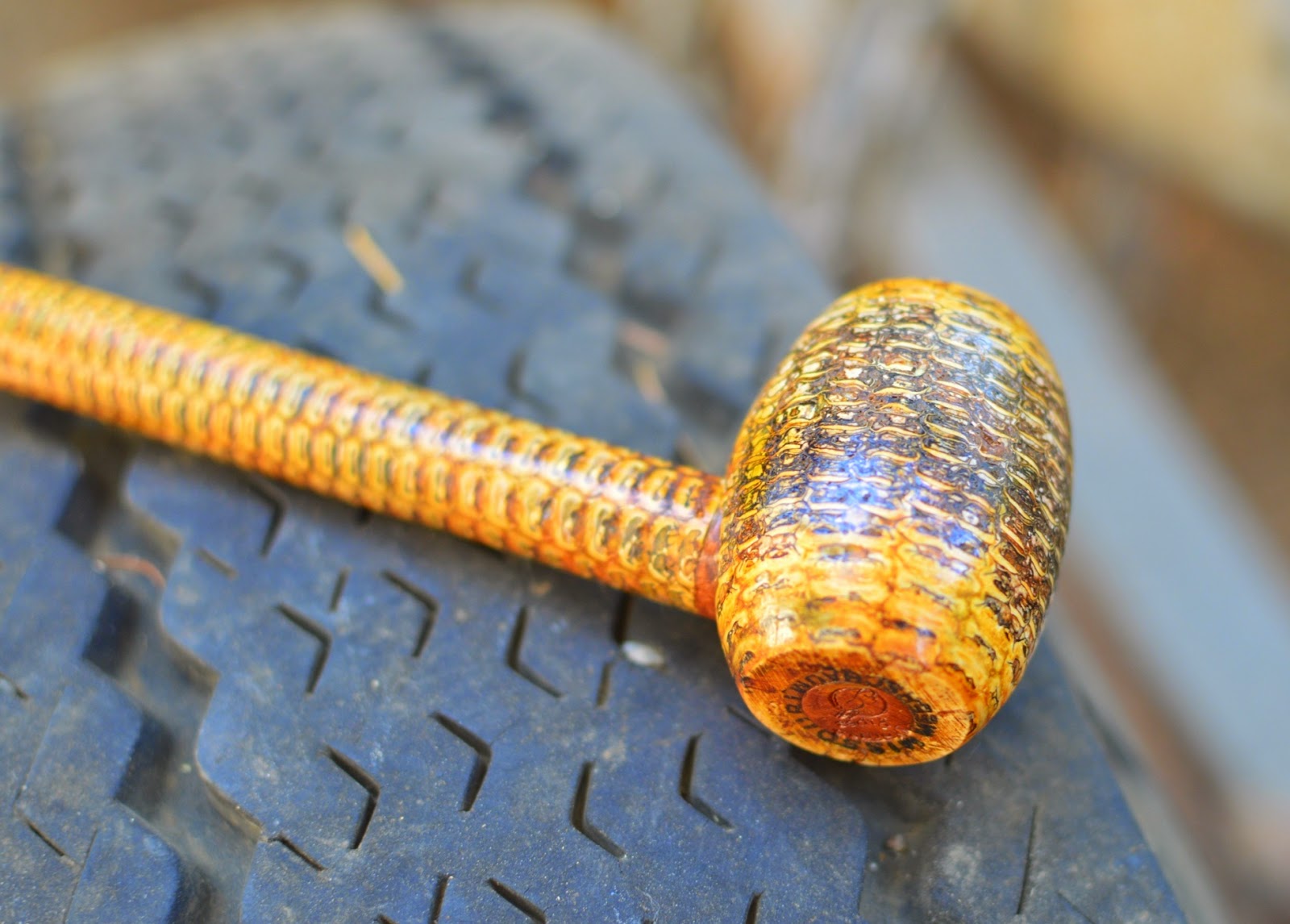 All of the Aristocob 2014 Cobfoolery Corn Cob Pipe entries in one picture! 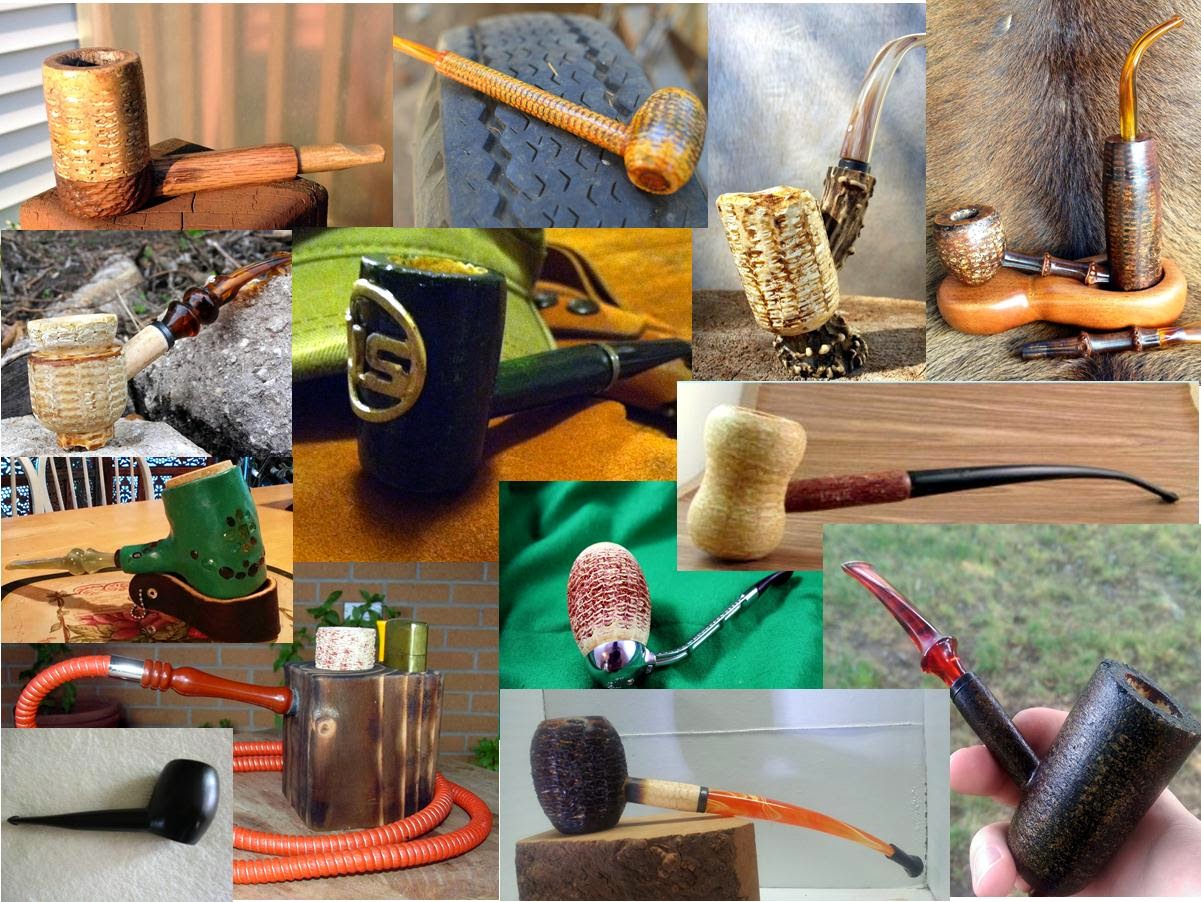 Wanna see all of the 2014 Cobfoolery entries in one place?  Yeah, me too.  Click on the pic to Biggie-Size the pic.
No comments: